Renewables instead of coal: +$78 trillion in benefits

According to the IMF, if all coal were eliminated from power generation worldwide, replacing it with renewable energies (wind and solar), this would result in net economic benefits of $78 trillion by the end of this century

To estimate the costs of implementing new renewable energy plants, the authors considered several factors, including:

Considering, then, that every tonne of CO2 emitted by coal carries social and environmental costs (climate change, pollution, extreme weather events, and so on), they applied a social cost of carbon (SCC, i.e. the total cost of CO2 taking into account its negative impacts on the environment and human health) of $75 per tonne, in order to calculate the benefits of reduced emissions due to the decreasing use of coal in the energy mix.

These costs, if not paid by those who produce the emissions, fall on society as a whole. Therefore, among the benefits of replacing coal with clean sources, these avoided emissions and related costs must be taken into account.

As shown in the table below, the total benefits of a global coal phase-out amount to $106 trillion, compared to costs for new renewable plants and compensation to fossil companies of $29 trillion, resulting in an estimated net economic benefit of almost $78 trillion by 2100. 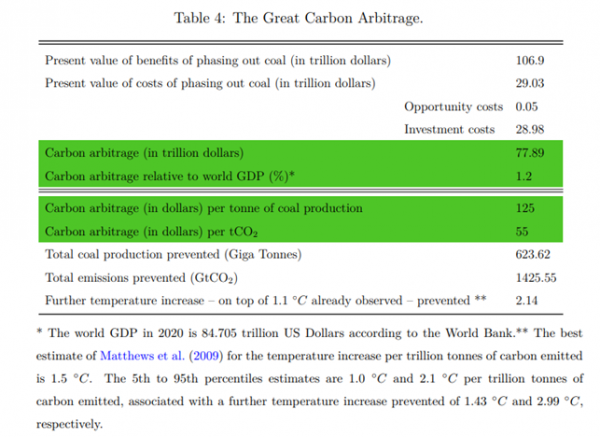 The study’s conclusions are that eliminating coal with renewables is not only climate-urgent, in order to comply with the Paris Agreement to limit global warming to +1.5 °C, but also very cost-effective, after deducting the costs of the clean energy transition.